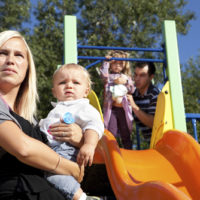 What defines a “parent” or “family” is constantly evolving, and a recent decision from Judge Stephanie Wauters in the Ocean County Superior Court is an excellent example of this evolution. In her written opinion in the case titled D.G. and S.H. v. K.S., Judge Wauters declared that a mother, father, and husband of the father of a small child were all, in some way, parents of a young girl, entitled to share custody of the child equally.

D.G. and K.S. had long been friends, and when D.G. married his husband S.H., the three became close. In 2006, the friends began seriously discussing having a child together, with K.S. carrying a child using D.G.’s genetic material, but with S.H. also playing an equal parenting role once the child was born, and with the child bearing his surname. Their daughter, O.S.H., was born in 2009. The three parents lived together in K.S.’ Point Pleasant home for a time, but eventually, the couple moved to Manhattan and continued having O.S.H. stay at their home on the weekends. S.H. would take a larger share of parenting duties during the summer, while he was on vacation from his job as a teacher. During a trip abroad, K.S. met a California resident whom she decided to marry. She came to D.G. and S.H. with her plan to move to California, taking O.S.H. with her. When the three failed to reach a parenting agreement by themselves, D.G and S.H. turned to the court for help. The couple filed a complaint seeking to have S.H. declared both a psychological and legal parent, as well as requesting legal and physical custody of O.S.H. as a couple, and seeking parenting time. K.S. responded with her own set of requests: namely, physical custody for herself; a parenting time arrangement among the three parties; child support; medical insurance; and permission to move with O.S.H. to California.

In a 19-day hearing, Judge Wauters heard the parties’ arguments, and largely sided with the couple’s requests. Judge Wauters found that, while there was no means by which S.H. could be declared a legal parent to O.S.H. under current law (and that a change to this would need to come from the legislature, not the bench), S.H. had established himself to be a psychological parent of the girl. In support of this conclusion, Judge Wauters cited the discussion between the three parties prior to O.S.H.’s birth declaring that S.H. should have a role as a parent of the baby, the emotional and financial support S.H. had provided, the bond that S.H. and the girl had, and the fact that the parents decided to give the girl S.H.’s last name.

Based on both the biological parentage of D.G. and close bond that both D.G. and S.H. shared with the child, the court determined that the three parties should have equal legal and residential custody of O.S.H., with the girl spending 50% of the time with K.S., and 50% with the couple. In determining whether a relocation of the child to California was in O.S.H.’s best interests, the court found that K.S.’ plans for her living and working arrangements in California were fairly tentative. The judge ruled that given the deprivation of D.G. and S.H.’s parenting time, the stable living arrangement O.S.H. currently enjoyed, and the distance between New Jersey and California, alongside the lack of finality of K.S.’ plans, it was not in the child’s best interests to relocate O.S.H. to California, and declined K.S.’ request.

If you are searching for experienced legal assistance for a complex custody dispute, divorce, or adoption matter in New Jersey, contact Englewood family law attorneys Herbert & Weiss for a consultation on your case, at (201) 500-2151.