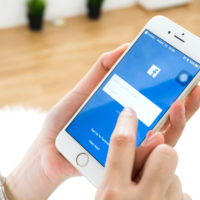 One of the biggest challenges in some family court cases arises before you even make it before a judge: finding and serving the claim on your ex. Under both the federal and New Jersey constitutions, defendants to any lawsuit must be provided with adequate notice and a chance to respond before a ruling can be issued against them. If you can’t find a way to provide that notice through traditional means–either personally serving them with the lawsuit or mailing a copy of the complaint via certified mail—then your options for pursuing a claim against the defendant can be limited. Those options appear to have been expanded to include Facebook as a forum through which to provide a defendant with notice of a lawsuit, based on a recent ruling by a Morris County judge in the case of Axberg v. Langston. This marks the first time that a New Jersey court has given its official blessing to providing notice of a lawsuit through social media.

The case at issue began when a stranger contacted a 15-year-old boy and his family members through social media. The boy had been adopted as an infant, and the man claimed to be the boy’s “real father.” The boy told his parents about the interaction. When his parents searched Facebook for the man, they learned that he had earlier tried to add the boy’s adopted father as a friend, and had posted a photo to his own account showing the boy among his other children.

The parents attempted to file a temporary restraining order against the stranger, but without a working phone number or address for the man, they could not serve him with the necessary court documents. When the family approached the court for help in resolving the matter, the judge stated that service through Facebook could be permissible, provided that the parents met a three-prong test that would provide assurance of the effectiveness of the notice. The family would need to prove: 1) that the man they sought to restrain was the person who operated the Facebook account in question; 2) that the account was being actively used by the man; and 3) whether an additional form of service was necessary.

The parents produced evidence supporting the first two prongs in the form of screen captures of the man’s Facebook page, showing that consistent photos of the man appeared on multiple social media accounts, indicating that he owned it and that he posted new content frequently. The family used the automatic read receipt, as well as the man’s response via message to receiving the notice of restraining order as a way to show he had seen the documents, and that he didn’t require service through supplemental means. Ultimately, the man appeared via telephone at the hearing on whether a final restraining order should be imposed, where he was barred from making any further contact with the boy.

If you are dealing with a challenging custodial dispute or potential divorce in New Jersey, get help from compassionate and seasoned family law attorneys by contacting the Englewood offices of Herbert & Weiss for a consultation at (201) 500-2151.