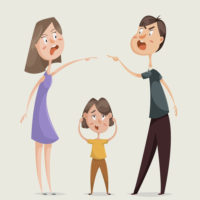 It’s no easy task to figure out how to be an effective parent after a divorce. You might assume that, after years of watching their parents fight while married, it is critical that you protect your children as much as possible from future conflict between yourself and your former spouse. Some parents attempt to reduce opportunities for conflict by limiting their children’s exposure to their other parent. However, this strategy can do more harm to your child’s long-term happiness than letting them see you fight, according to a new study.

Linda Nielsen, a professor of psychology at Wake Forest University, set out to learn more about the effects on children of conflict between parents who shared custody. In one section of her study, she compared the outcomes of children who were raised by one parent with sole physical custody with those of children raised in a shared custody arrangement where parents were prone to conflict. According to her research, children who had a chance to develop a close and meaningful relationship with both parents fared better long-term than did children for whom only one parent held physical custody. Even where parents sharing custody were prone to fighting, these conflicts had less of an impact on child happiness than did only spending brief periods of visitation with one parent.

Many courts continue to award only one parent with physical custody, in an attempt to provide stability and protection from conflict for that child. Nielsen argued that this approach of limiting a child’s contact so dramatically with one parent provides far fewer benefits than previously believed. She explained, “The role of conflict has too often been exaggerated and should not be the determining factor in child custody decisions.”

Nielsen didn’t dismiss entirely the effects of parental conflict on children, and maintained that parents should still try to reduce the amount of conflict to which children are exposed. “Of course, it bothers kids when their parents quarrel. Conflict does matter. But what we’re saying is that the quality of your relationship with your parents matters a whole lot more than the parents’ relationship with each other.” She suggested that, “rather than assuming that joint physical custody is not an option,” parents and family courts should focus on finding solutions that support the child’s relationship with both parents.

If you’re a New Jersey parent who is considering divorce, ensure that you’re able to maintain a strong bond with your child post-divorce by finding skilled, dedicated legal help for a custody dispute by contacting the Englewood family law attorneys at Herbert & Weiss for a consultation, at 201-440-6300.