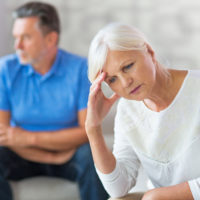 While divorce among many demographic groups is shrinking, it is increasingly common for people over 50 to divorce. Learn more about the reasons for the increased number of divorces among baby boomers, and special considerations for those divorcing at a later age, below.

Reasons for rising divorce rates for those over 50

Members of the baby boomer generation were often raised believing that divorce should be avoided like the plague, and they carried that belief into adulthood. However, societal norms have shifted away from strong taboos against divorce, resulting in changed mindsets among older adults.

As the average lifespan increases and people remain active well into their 70s, fewer people are willing to spend decades of their lives post-50 in an unsatisfying marriage or paired with someone who does not share their interests. Along those lines, once children are grown and out of the house, many older couples who are no longer a parenting team learn that they have less in common than they may have believed.

If you’re considering a divorce after age 50, keep the following in mind:

Divorce will require you to set up a new home on a single income, which means that you’ll probably need a large amount of cash-on-hand when you divorce. Keep this in mind when going through the asset division process of your divorce. For example, if in the division of assets you end up receiving much of your share in retirement account assets, you’ll incur substantial tax penalties when you attempt to withdraw funds.

If you’re the spouse who will be receiving alimony, you may want to consider requesting that the court require your spouse to purchase a life insurance policy, listing you as the beneficiary. That way, if your spouse passes away unexpectedly, you will still have a source of income until you make other arrangements.

3. Recognize the impact that a late-in-life split will have on your kids

Keep in mind that, even though your children are older, your divorce from their other parent could come as a shock and a challenge. Your children have only known you as a couple for their entire lives, and they may need time to mourn the end of your marriage.

If you are considering getting a divorce over age 50, be sure to speak with a knowledgeable and experienced New Jersey divorce lawyer, and contact the Englewood offices of Herbert & Weiss for a consultation at (201) 500-2151.