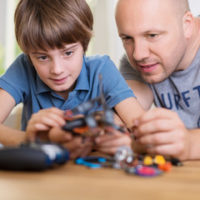 A recent New Jersey appellate case illustrates some of the issues that can arise in implementing divorce judgments that involve custody arrangements, especially with ex-spouses who cannot agree on anything. Read below for the details of the case, and contact an experienced New Jersey child custody and divorce attorney with any questions about custody arrangements.

A case called P.T. v. A.T. involves a couple who divorced in 2009 with a daughter born December 2006. The mother has custody, while the father has rights to “parenting time.” Parenting time means visitation or the time the non-custodial parent spends with the kid. Since the divorce, the parties have filed numerous motions concerning parenting time and other issues. They went to court at least 14 times in the first six years after the divorce.

The court emphasized that the issues arose because the parties were consistently unable to agree on anything outside of the court’s exact words which, of course, cannot cover every possible situation. Parties are strongly encouraged to resolve issues themselves and to go to court only as a last resort.

This opinion from the New Jersey Appellate Division concerns the father’s motion to restore parenting time after the mother allegedly interfered with his time with their daughter, and after the father’s parental rights were temporarily suspended. The opinion is unpublished and binding only on the named parties, but it is informative on how courts may deal with divorced couples in similar situations. The father argued that the mother had intentionally scheduled the girl’s dance lessons during his planned parenting time, that he was not told about the girl’s medical visits, and that the mother prevented him from talking to their daughter on the phone. The family court rejected the father’s argument, finding that the mother had not violated the court order or withheld medical information.

Father goes back to court, has parenting rights suspended

The father went back to court seeking reconsideration of the motion, but the court found that he failed to seek reconsideration within the time limit. Around the same time, the mother filed a motion to suspend the father’s parenting time because, according to the girl, the father had been watching pornography during his parenting time. Because the New Jersey Division of Child Protection and Permanency found no corroborating evidence outside of the child’s statements, the family court ordered only a temporary suspension of his parenting time pending the results of a psychological evaluation.

The father appealed the order, seeking to lift the suspension and again to restore his “lost” parenting time. The Appellate Division rejected the appeal, finding that it was improper procedurally and that the family court had made no other errors on the merits.

The Appellate Division emphasized that in every motion involving custody or parenting time, the primary consideration is the “best interests of the child,” which focuses on the “safety, happiness, physical, mental and moral welfare of the child.” In this case, the family court was correct that nothing the mother did had violated the custody plan to the detriment of the daughter.

As to the suspension of the father’s parental rights, the Appellate Division said he appealed too early–the psychological evaluation already happened, so the family court should first make a decision based on the results before the father can appeal.

If you are facing complicated custody matters such as parenting time issues, call the skilled and effective family law attorneys at the Englewood offices of Herbert & Weiss for a consultation at (201) 500-2151