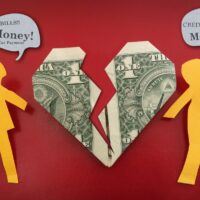 Not every divorce battle is about what each party wants to get. Some fights concern what each party does not want in a divorce. Married couples do not just share the property; they share the liabilities and debts associated with that property, as well as other debts common to the marriage. When couples divorce, what happens to those debts? Read on for an explanation of how debt is distributed in New Jersey divorces, and call a seasoned Englewood divorce and property division attorney for help with a New Jersey family law matter.

Debts, like assets, are divided in a divorce as part of the equitable distribution process. “Equitable” does not, however, mean equal. Debt is distributed in accordance with the principles of equity and fairness. Additionally, like assets, the debt must be properly classified as separate and marital debts. Separate, non-marital debt stays with the individual who acquired it, just like separate property. Marital debt will be divvied out to the parties through settlement negotiations or, ultimately, as determined by the court.

The Distribution of Marital Debt

The court will evaluate the distribution of debt under a variety of factors, including the length of the marriage, the spouse’s relative income and financial circumstances, tax consequences of the distribution, contributions made by each spouse to enhance the other’s earning potential (e.g., paying for graduate school), and the nature of the debt. There are 16 factors listed in New Jersey law for the court to consider inequitable distribution.

Some general approaches to debt have also emerged from New Jersey case law. For example, credit card debts related to normal living expenses will be divided up equitably between the parties, with the wealthier spouse likely taking on more of the debt given their enhanced ability to repay and the likelihood that they would have been responsible for paying down more of the debt had the marriage continued. Credit card debt for other expenses, such as large purchases that benefited the marriage, might be split equally between the parties.

The specific distribution will depend on the individual circumstances of each family. A seasoned divorce debt distribution attorney can help you evaluate your assets and liabilities in order to predict likely distribution outcomes and help you negotiate for a more favorable settlement of debts and asset distribution.

How Debt Affects Other Divorce Issues

The distribution of marital debts and assets may affect other aspects of divorce. For example, when establishing appropriate amounts of child support for each parent, the court will consider the “reasonable debts and liabilities of each parent.” The court will also look at the “equitable distribution of property order” and “whether a spouse has received a disproportionate share of equitable distribution” in evaluating alimony. If a party winds up with a disproportionately large share of the debts, especially in comparison to their share of the marital assets, the court may reduce the amount or duration of alimony, or the judge might shift the burden of child support.

If you are dealing with a property division in New Jersey or if you are gearing up for a divorce, contact the Englewood family law attorneys Herbert & Weiss at (201) 500-2151.