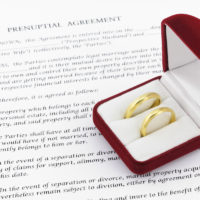 New Jersey’s Uniform Premarital Agreement Act was first adopted in 1988. This law sets out what is required for a valid premarital agreement in New Jersey. First of all, the document must be in writing and signed by both parties. A statement of assets must also be prepared and attached to the Agreement, ensuring that each spouse has provided a fair and reasonable disclosure of their financial information to the other spouse.

Prior to the new law, a prenuptial agreement could be challenged on several grounds, if the person challenging the agreement could prove one of the following by clear and convincing evidence:

This change applies to prenuptial agreements entered into after the June 28th effective date of the new law. For older agreements, the provisions of the law before the amendment application. Most people agree that the changes will make it harder to challenge a prenuptial agreement as unconscionable and that more premarital agreements will therefore be enforced by the courts than they have been in the past. If you are challenging or defending the enforceability of a premarital agreement, contact an experienced New Jersey family law attorney who can review the agreement and the facts surrounding its execution, and let you know what your rights are concerning the agreement.